Holy moly, it is hot!

We went shopping in damn hot weather, and to avoid the crowds, we decided to go outside the center of Shinjuku. This turned out to be a mistake, as the 10-minute walk in the blazing sun brutalized our bodies. Awaiting us was the oasis of 2-chome, Tokyo's prime gay nightlife hub and home to Tsukemen Gachi. We don't belong to the former community, but we do like fabulous tsukemen. 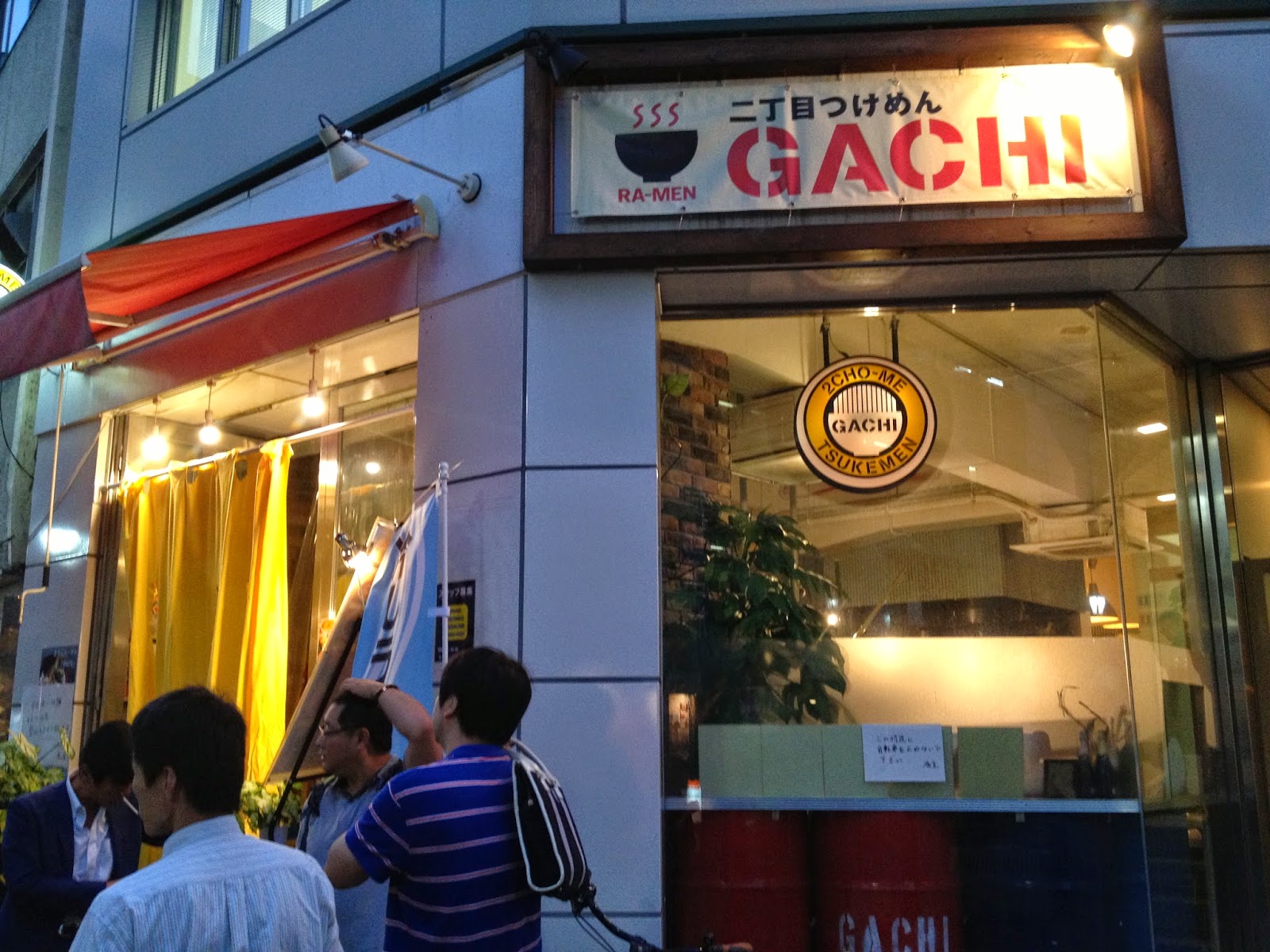 The menu here is fabulous as well. Run by the mad ramen scientist Shono Tomoharu (we reviewed his Abura Soba GACHI last year), Gachi has an array of limited-edition options that are finely tuned for the summer sun. It's been a year since Shono-san hosted the first annual "nagashi tsukemen" party there, so we felt the need to see how the shop has evolved since.

With any Shono shop, the only certainty is change. I ordered the hiyashi white, a bowl that consists of coconut milk soup. It tasted like a mild green curry, but was not overwhelming and had a mild spice. The noodles here are thin and pair well with the cold, tangy soup.


If I could be so bold, I believe this is the BEST cold ramen I've ever had. The overall balance of the bowl - the spiciness, the firmness of the noodles, the sourness of the pickled ginger, and the creaminess of the soup - make this the perfect summer ramen. For a change, I was really moved. 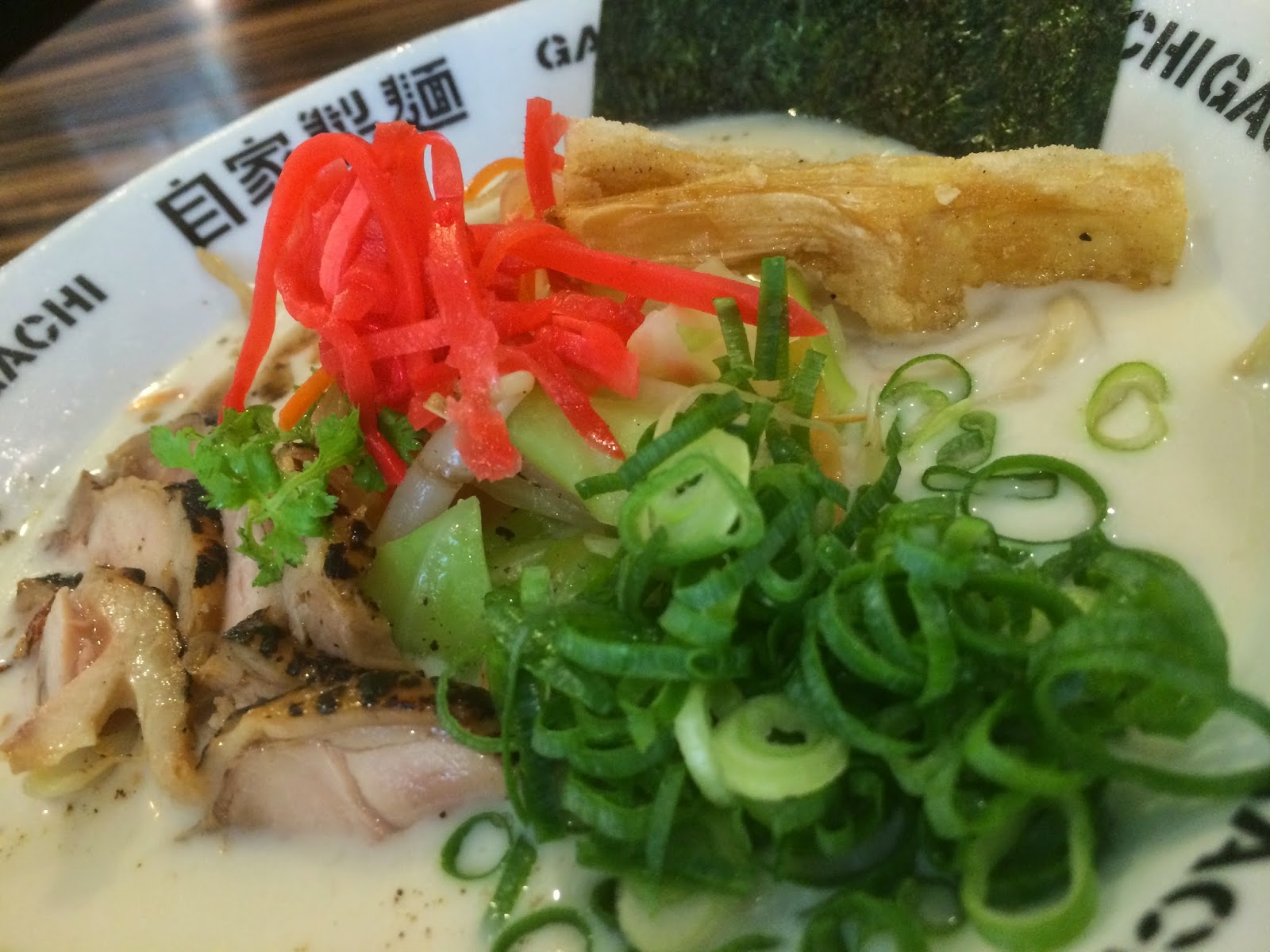 Hearts ordered the hiyashi corn, a heartier bowl filled with both lightly fried baby corn and roasted corn off the cob.The soup is based off of rich shoyu and chicken stock, and really went well with the sweetness of the corn. Another cool winner (though mine was better!).


Finally, we had the opportunity to have a THIRD bowl because we dragged along a special guest from the US. He ordered the Spicy Teriyaki DX, full of fried chicken and other toppings like deep fried menma.


This is a masculine bowl, with a unique chicken base porridge that pairs with the thicker elastic noodles. I imagine this bowl goes well with beer. What's great is that the soup wari comes with a little extra spice and tastes like a Mexican chili bean soup! 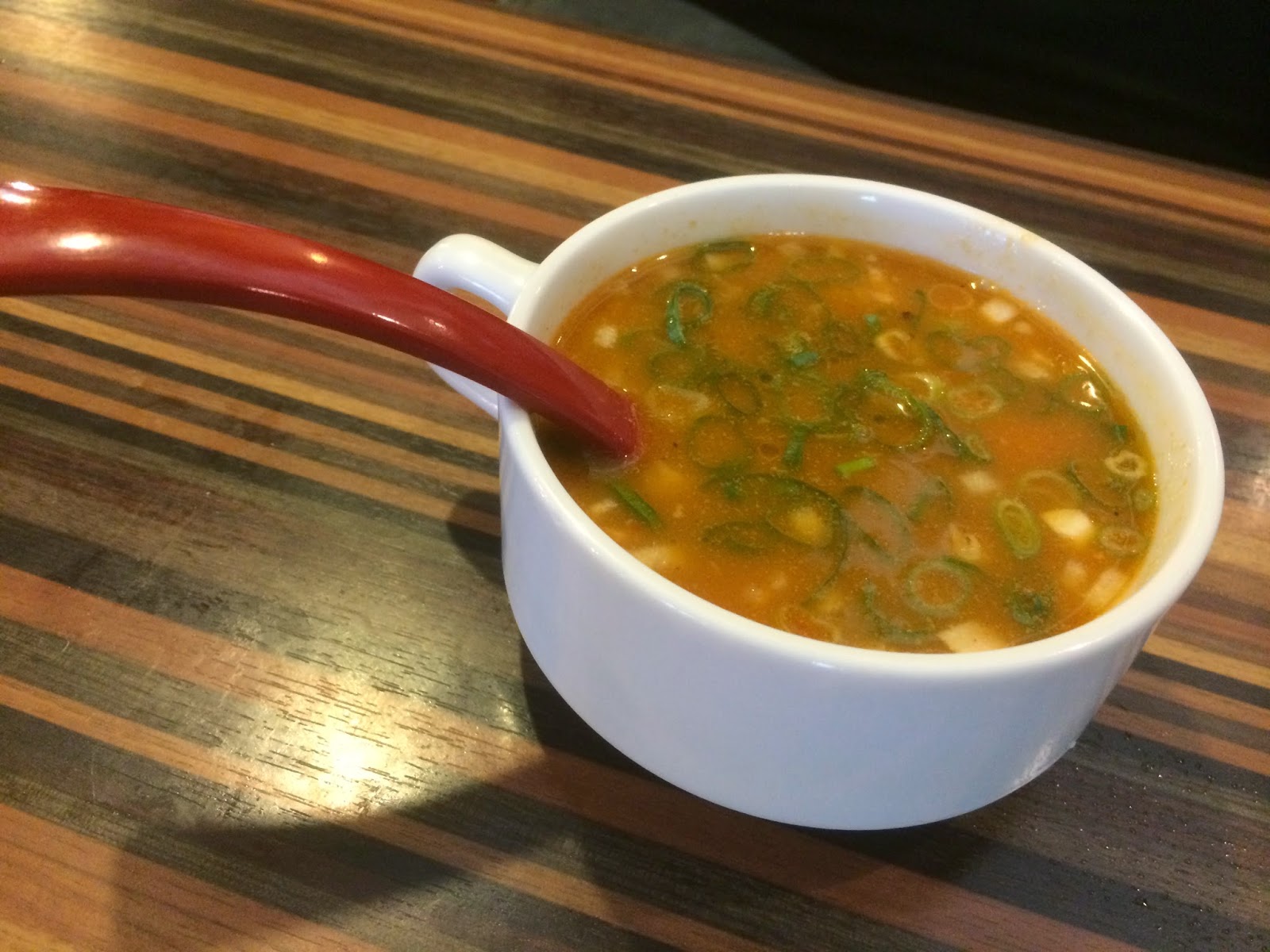 Shono's shops never betray our expectations. Every Tokyo branch surprises with its creativity, and Gachi is no exception. The atmosphere is an mishmash of American pop culture, with MJ music blaring and lots of random paraphernalia (police tape on the AC, drum cans for tables). And the tsukemen variety is endless. Gachi is it! 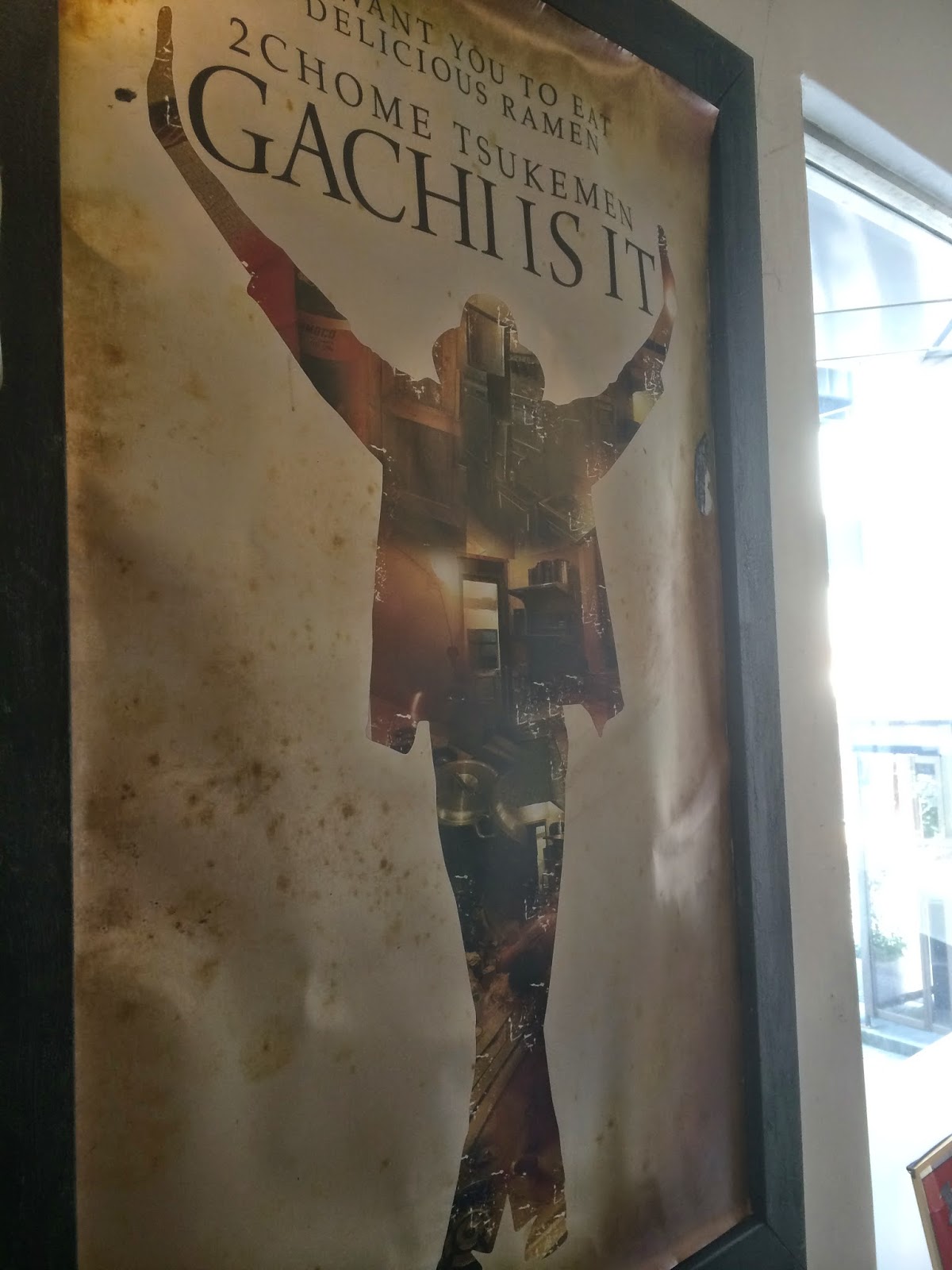 Lum
Posted by Ramen Love at 2:47 PM No comments:

We recently tried the beef bone bowl at Matador, but were told on the way out that the ramen bullfighters have a sister shop that serves a kick-ass bowl of miso. This was too much for me to handle; I broke down in tears and screamed at the staff that I would go to Miso Matador the very next day (true story). 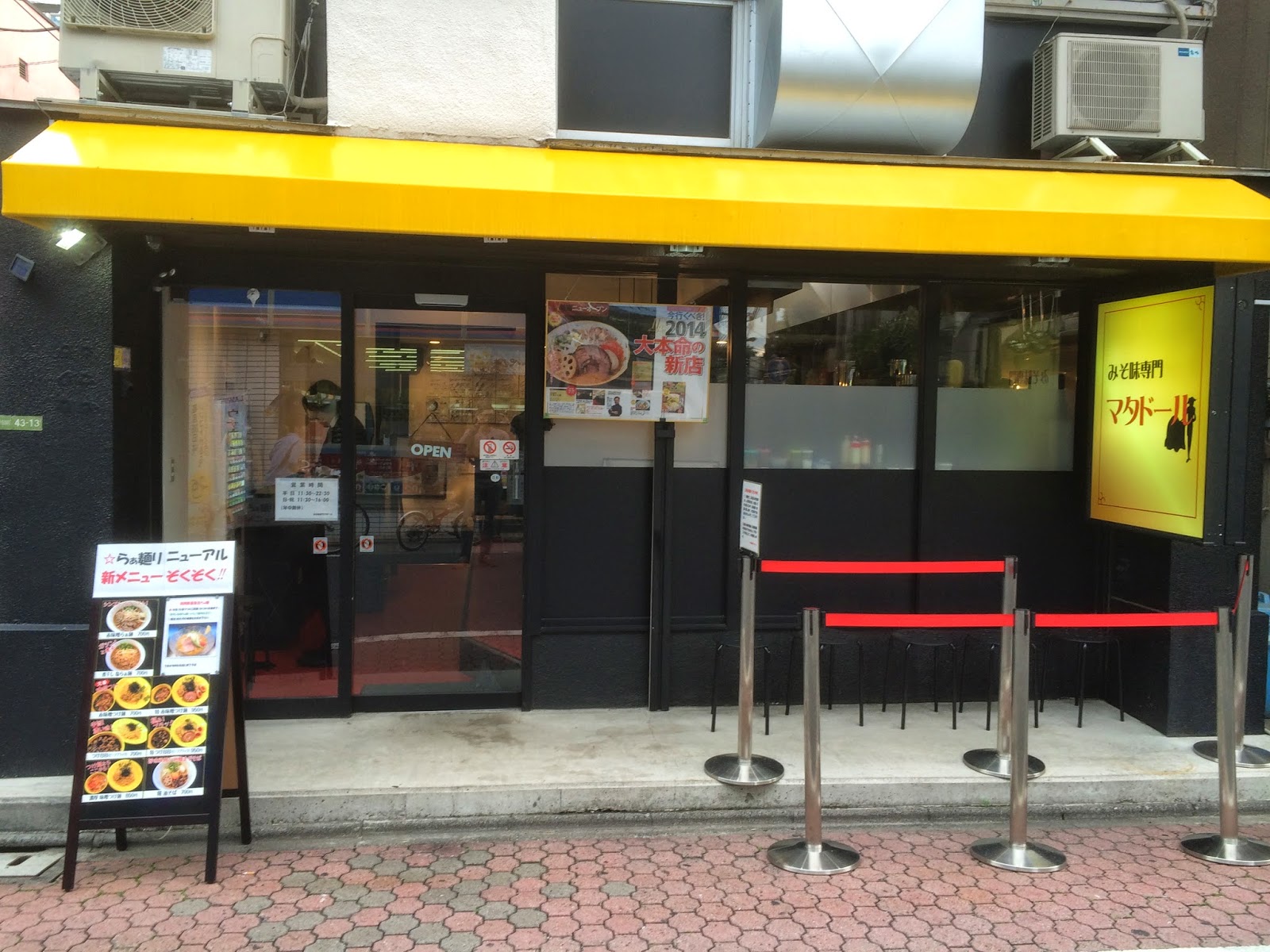 Miso Matador's claim to fame is, indeed, its miso, served noukou, or "thick as mud." This is rich, complex miso that you shouldn't give to grandma (unless you're trying to murder grandma, in which case, this bowl will do the deed).


The "zeitaku" version is loaded with an obscene amount of toppings. Like its meatier, abusive brother that gets all the attention, Miso Matador serves up some great meat toppings. Two thick, sweaty pieces of meat adorn this bowl: the same roast beef that tops the beef bowl at Matador, as well as a dense slice of smoky, marbled beef chashu. 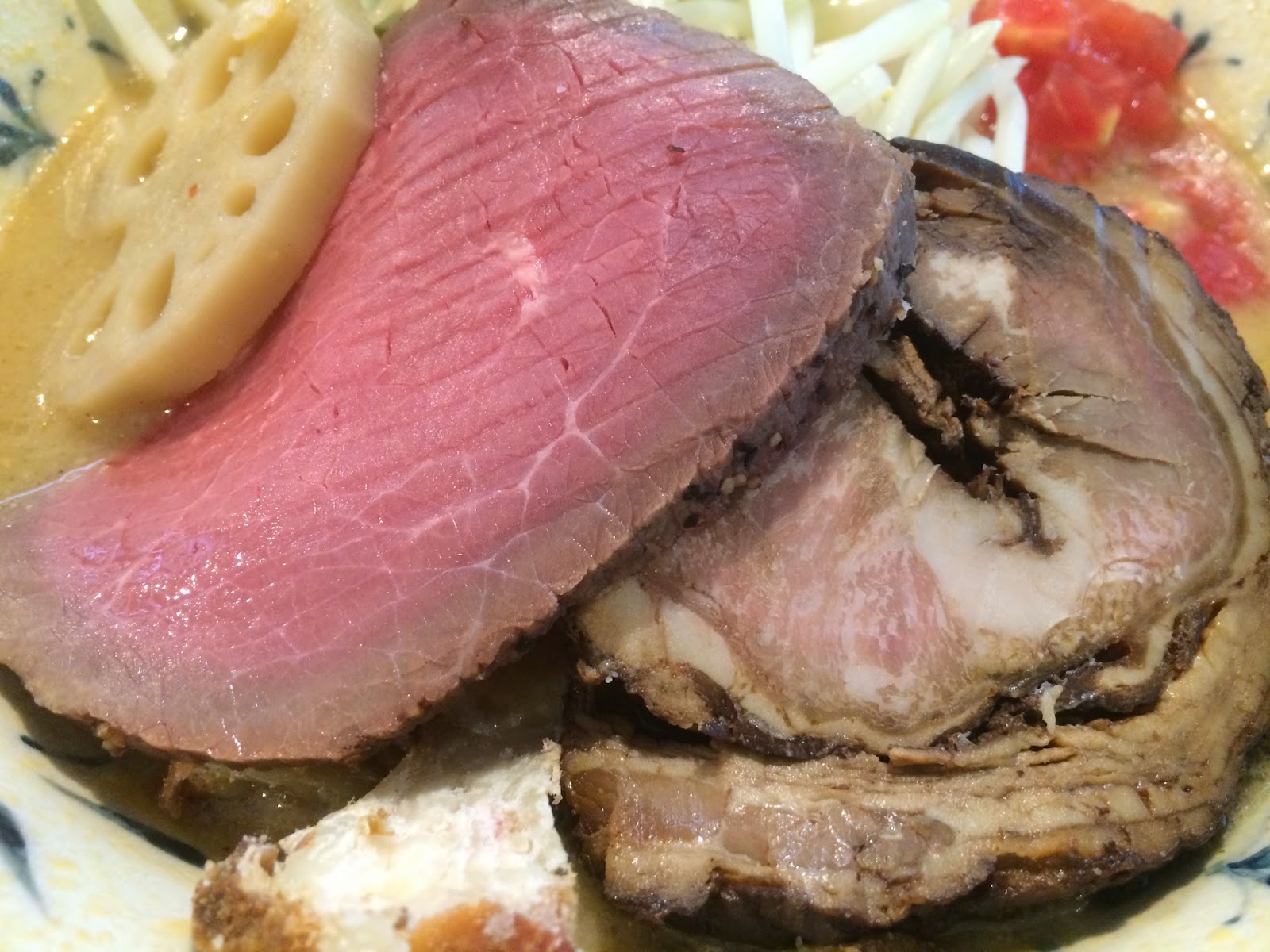 But wait! There's more. Miso Matador flicks some cool salsa into the proceedings, since miso can be very intense and get a little monotonous by the end. 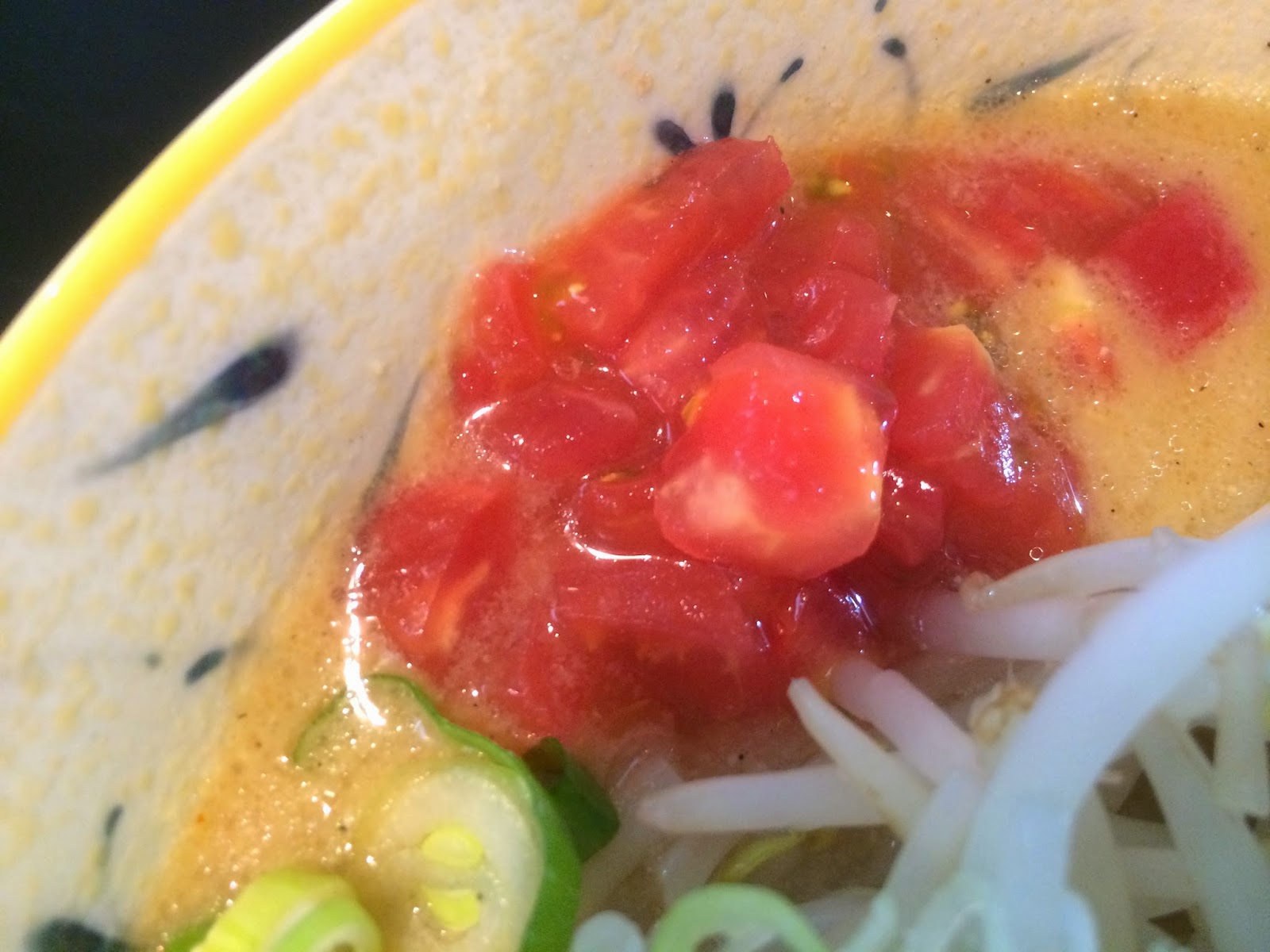 This bowl indeed grabs you by the shirt collar and gives you a few swift jabs to the face. Intense flavor, like a good little bowl should. 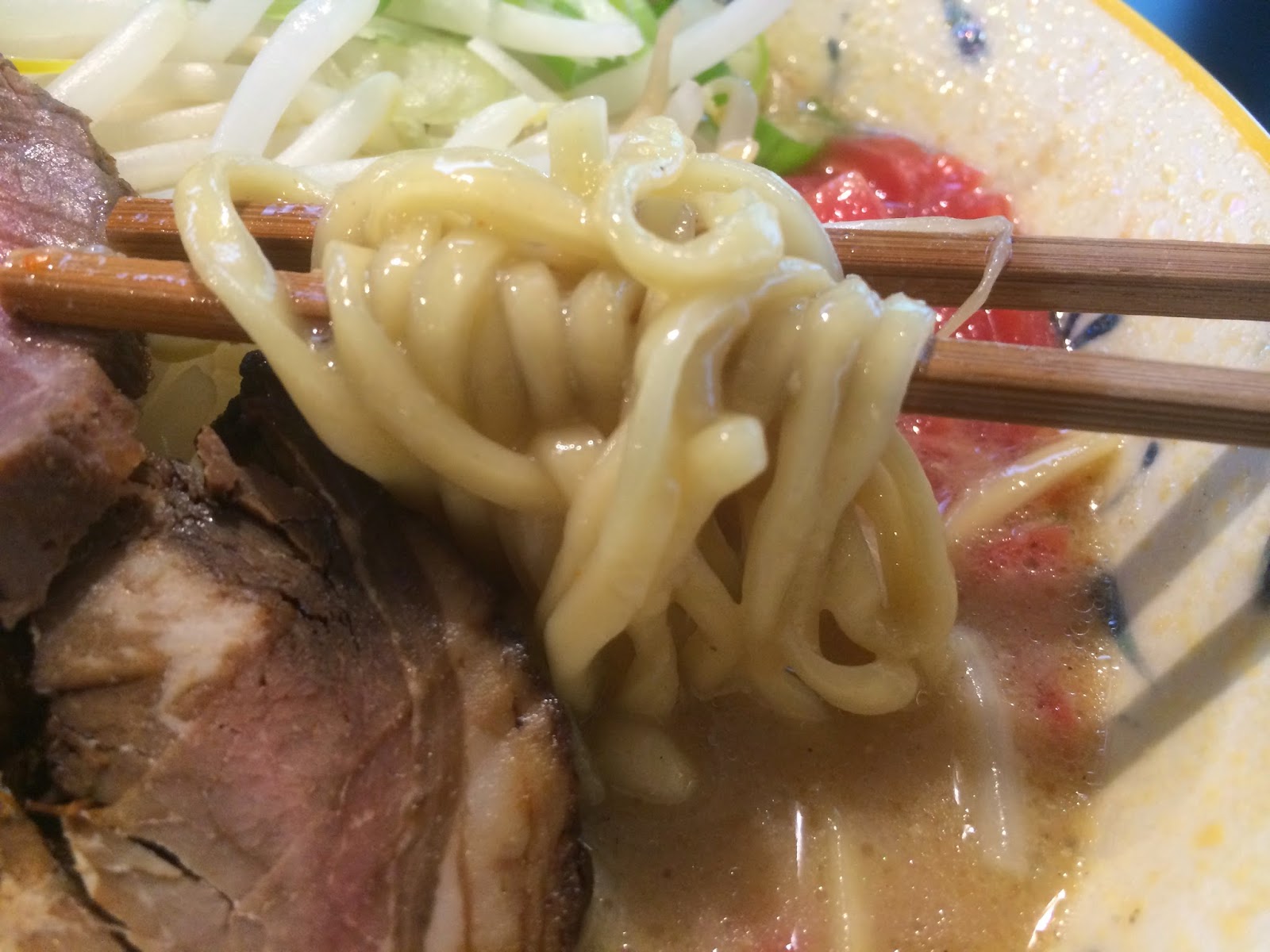 But it's not enough to put you down. Perhaps it's my rapidly advancing age, but I rarely finish bowls of miso. I get mighty sick of that thick, intense soup pretty soon after the noodles are vanquished. Though the salsa and lotus roots are creative additions, after all is said and done, Miso Matador is still a miso. 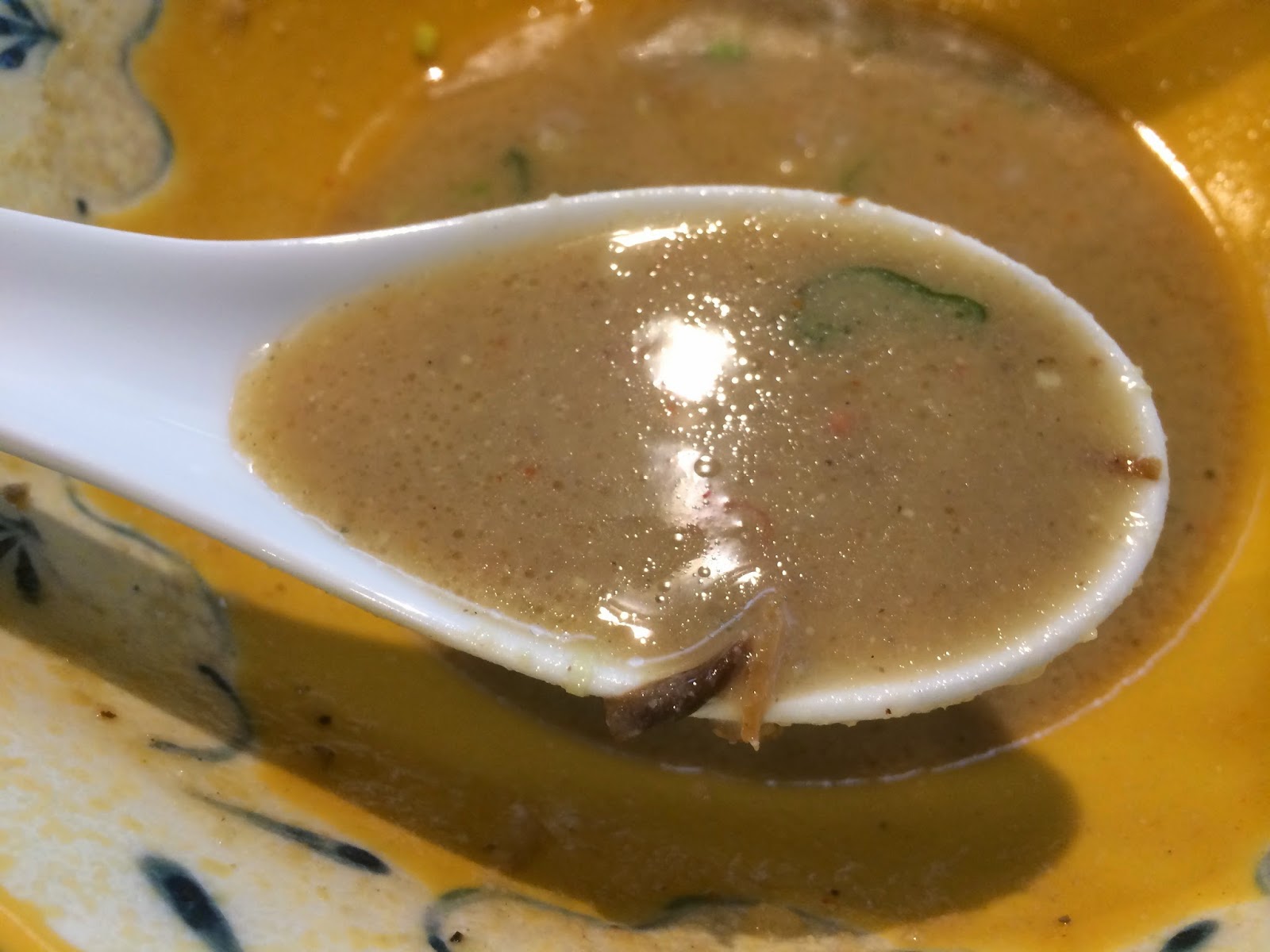 But not every bowl needs love and a promise of commitment; some bowls just want to have fun and ride the ramen carousel. Miso Matador is still experimenting with its ramen identity, and doesn't need to be shamed for being true to itself. 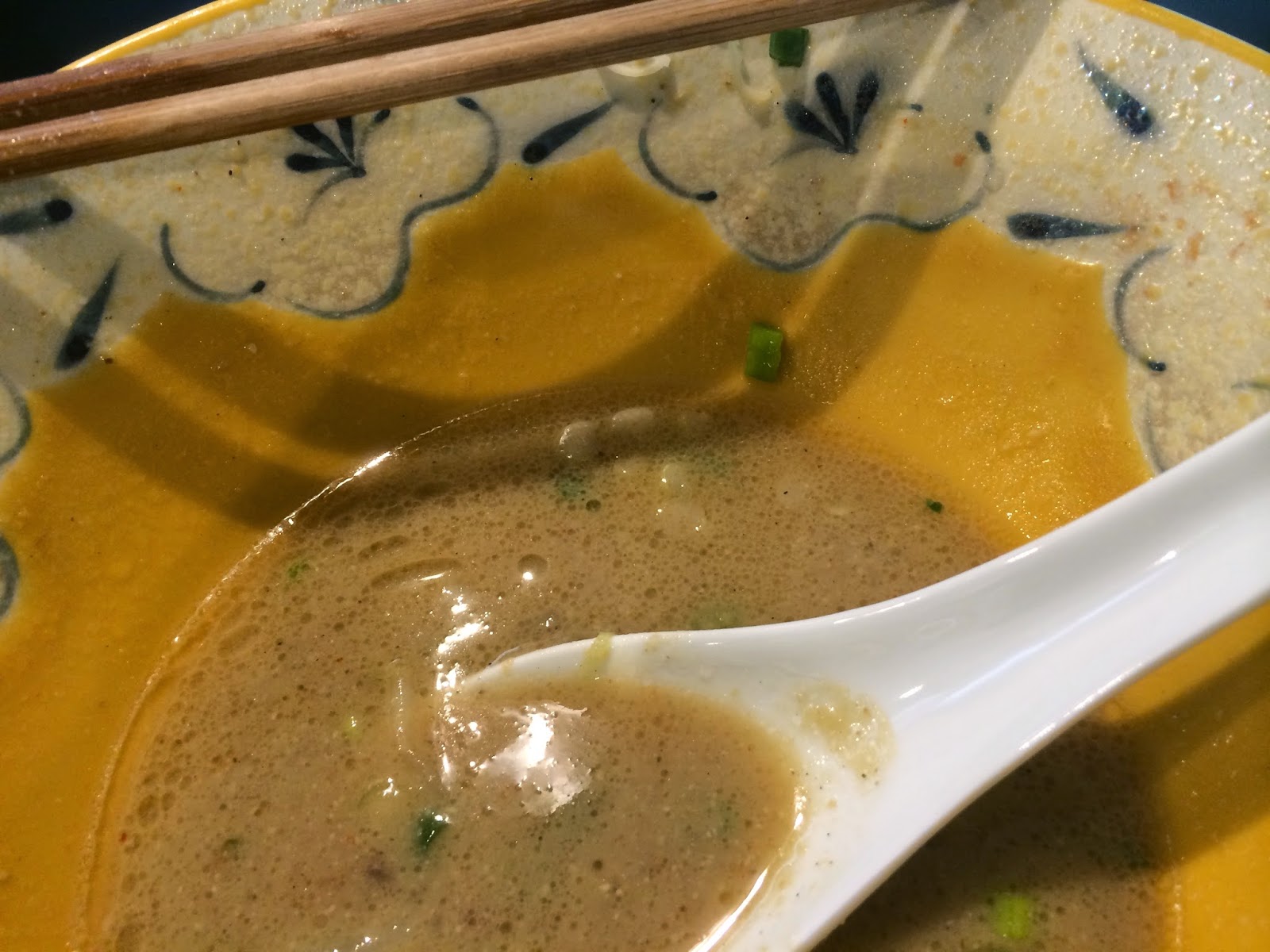 Hearts
Posted by Ramen Love at 11:04 AM No comments:

With the rainy season finally over, we can once again aim for ramen locations that are less convenient, long walks from nearby stations. Yamaguchi is about a 10-minute walk from Takadanobaba station, a premier Tokyo ramen battlefield. Their speciality: an all-chicken ramen. 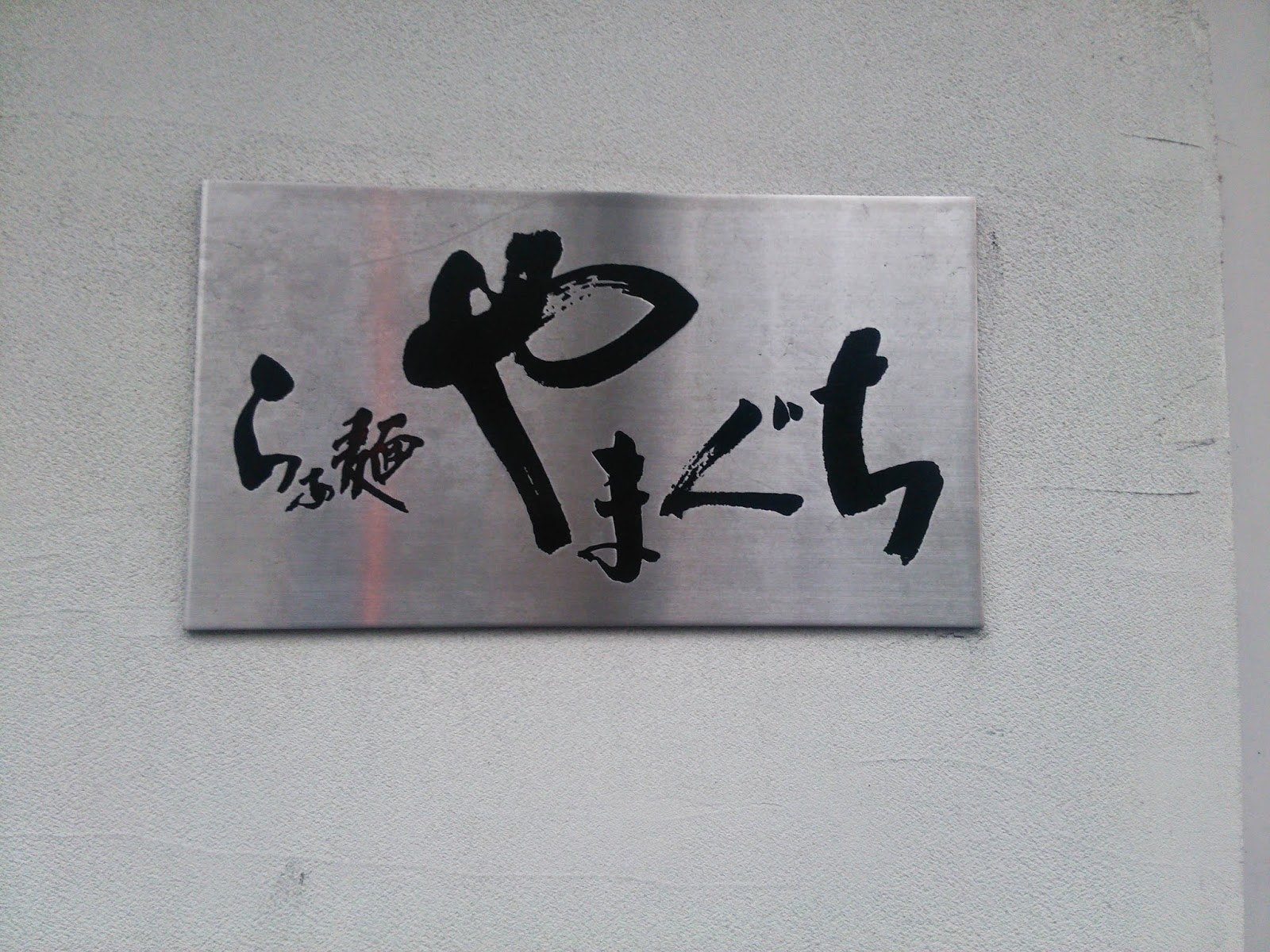 We were the first ones to the shop at dinner, but several people arrived right after us to form a small line before the shop opened. The entire shop is a clean U-shaped counter, with some visibility into the kitchen in the back. 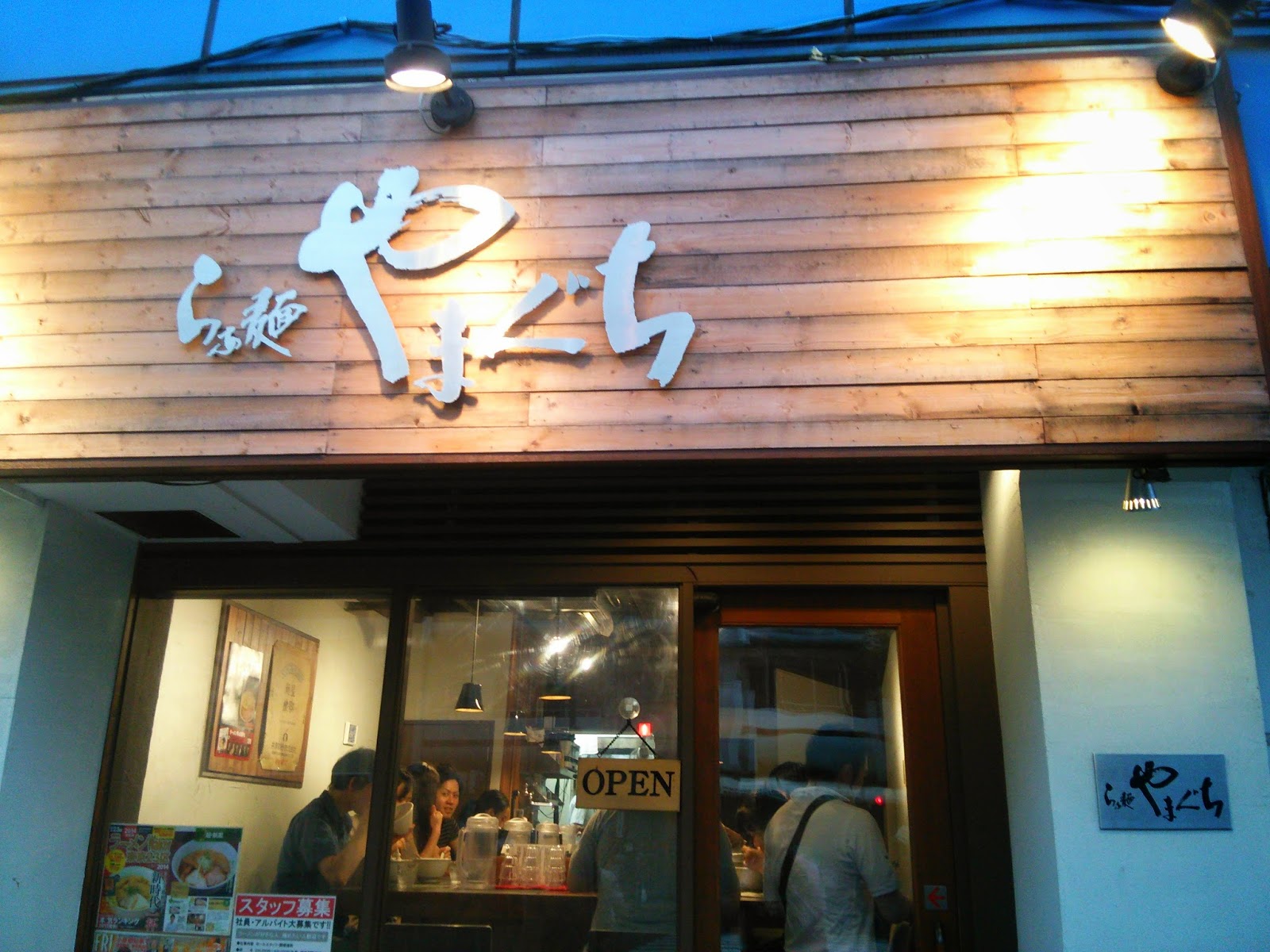 We both ordered the beautiful-looking tori-soba.


Unlike tori-paitan, Yamaguchi's chicken ramen isn't a thick porridge, but is clear and really brings out the essence of chicken bones. The noodles are surprisingly silky and smooth, and the warmth spread through my body like a cool air conditioner. 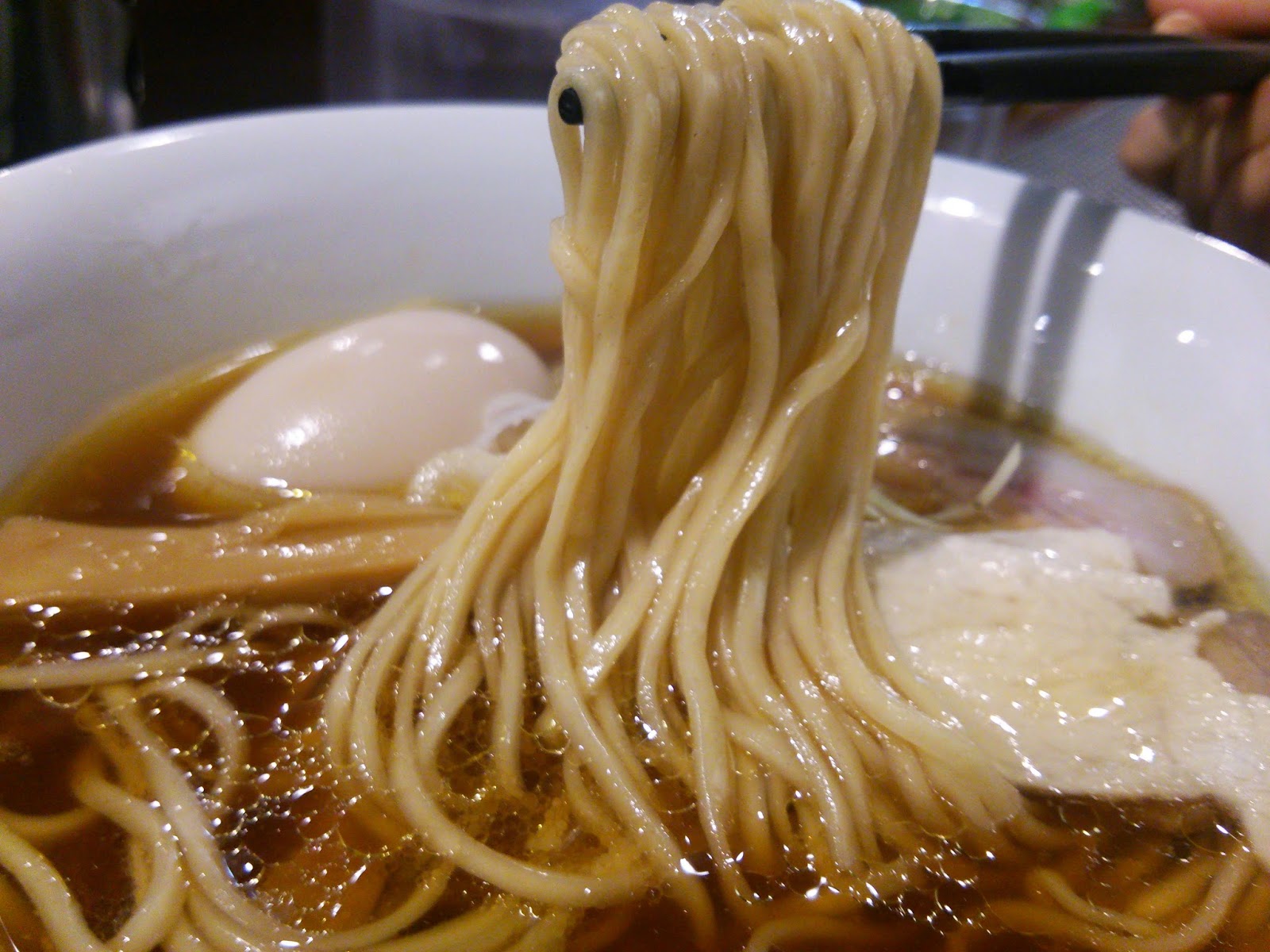 The "chashu" is fantastic: large pieces of chicken coated in starch for a slippery and soft texture. This is probably the best chicken chashu I've ever had. 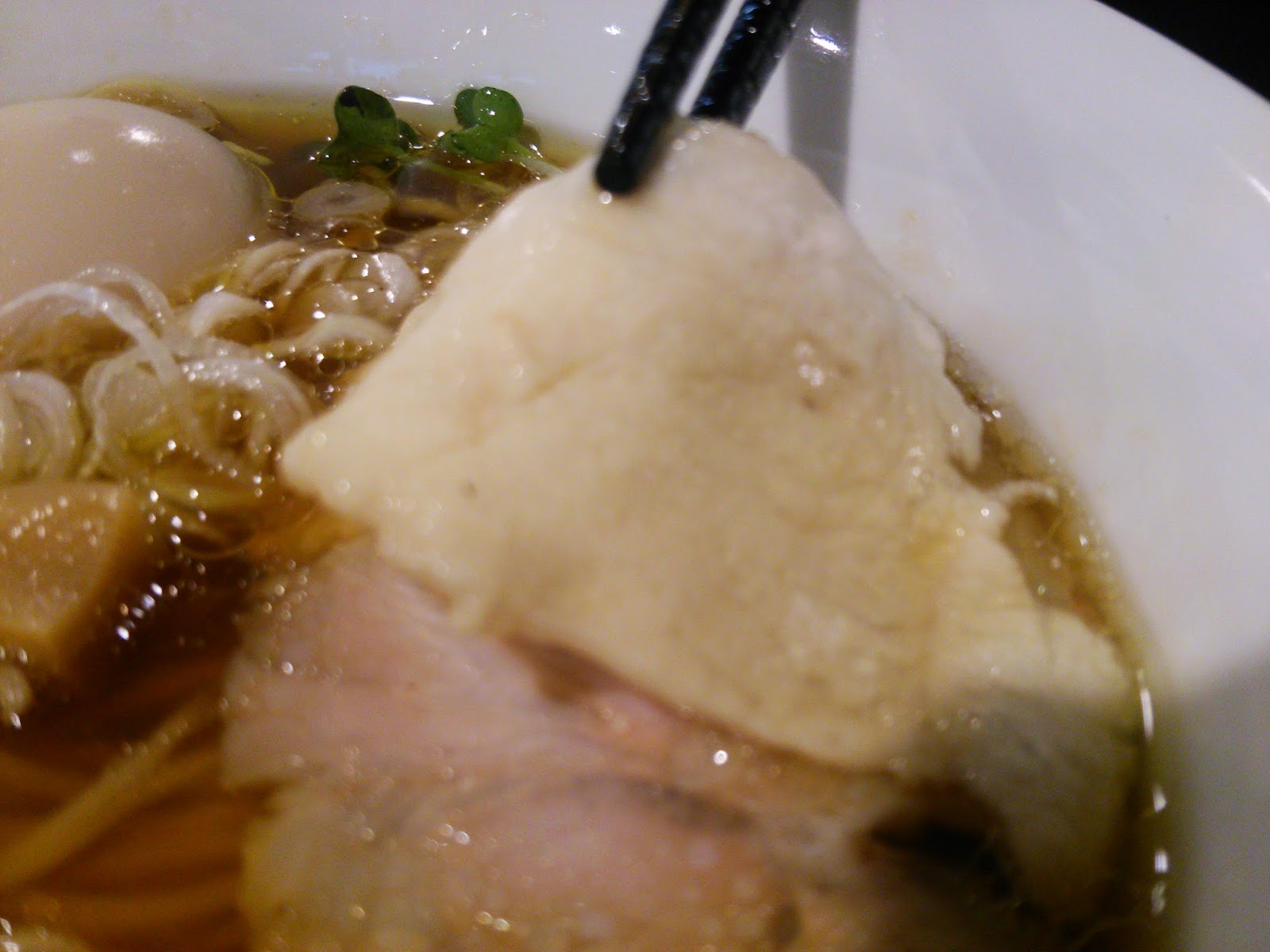 There were only a couple drawbacks to the bowl. First, the noodles could have been firmer, as they became too soft by the end of the bowl. And while this bowl apparently is made without any additives, it was pretty salty. You feel that salt after you finish the bowl, although Hearts enjoyed it so much, he didn't take a single sip of water until he finished his last drop of soup. 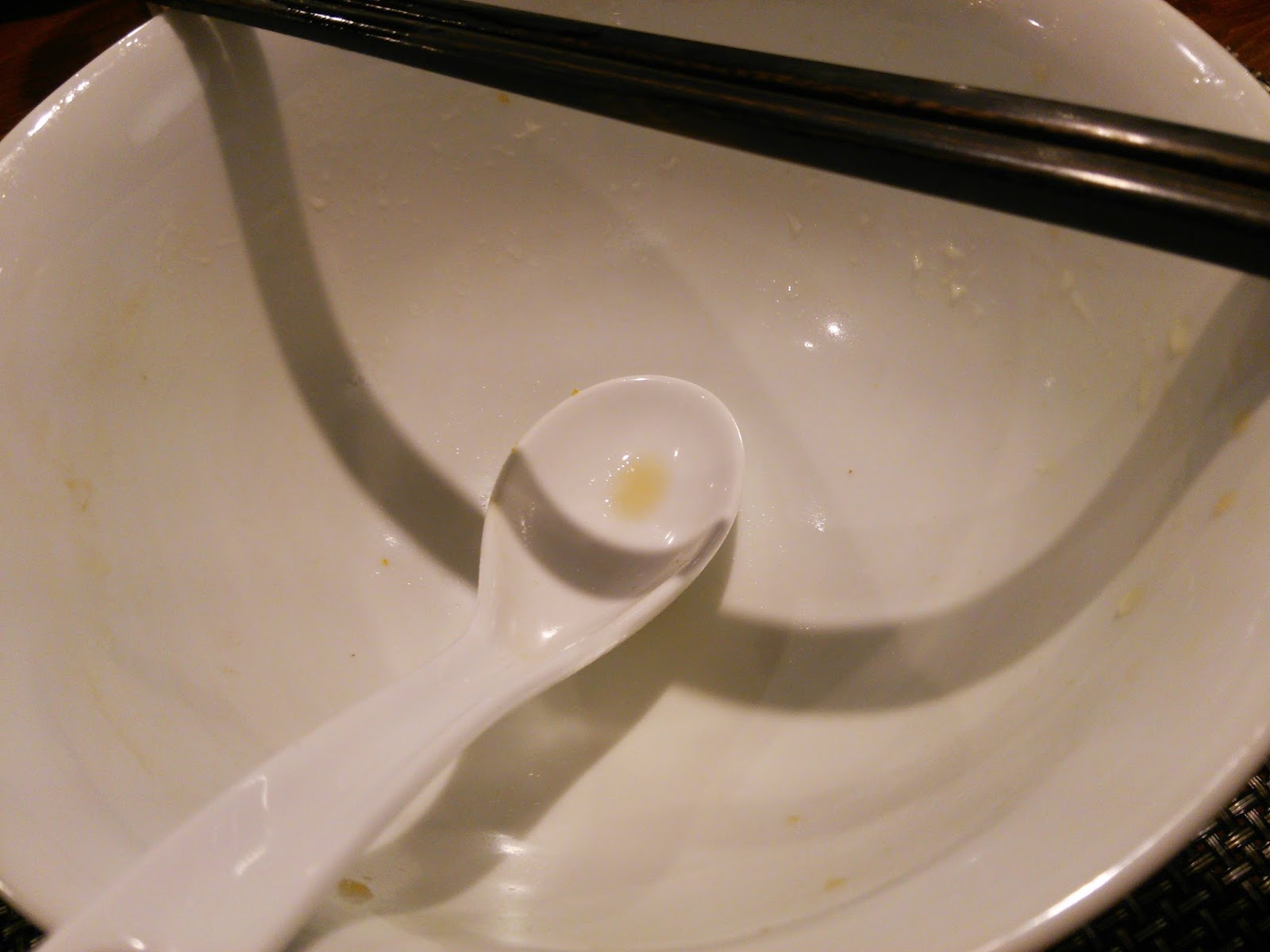 This isn't my top chicken ramen, but the general quality is still splendid. 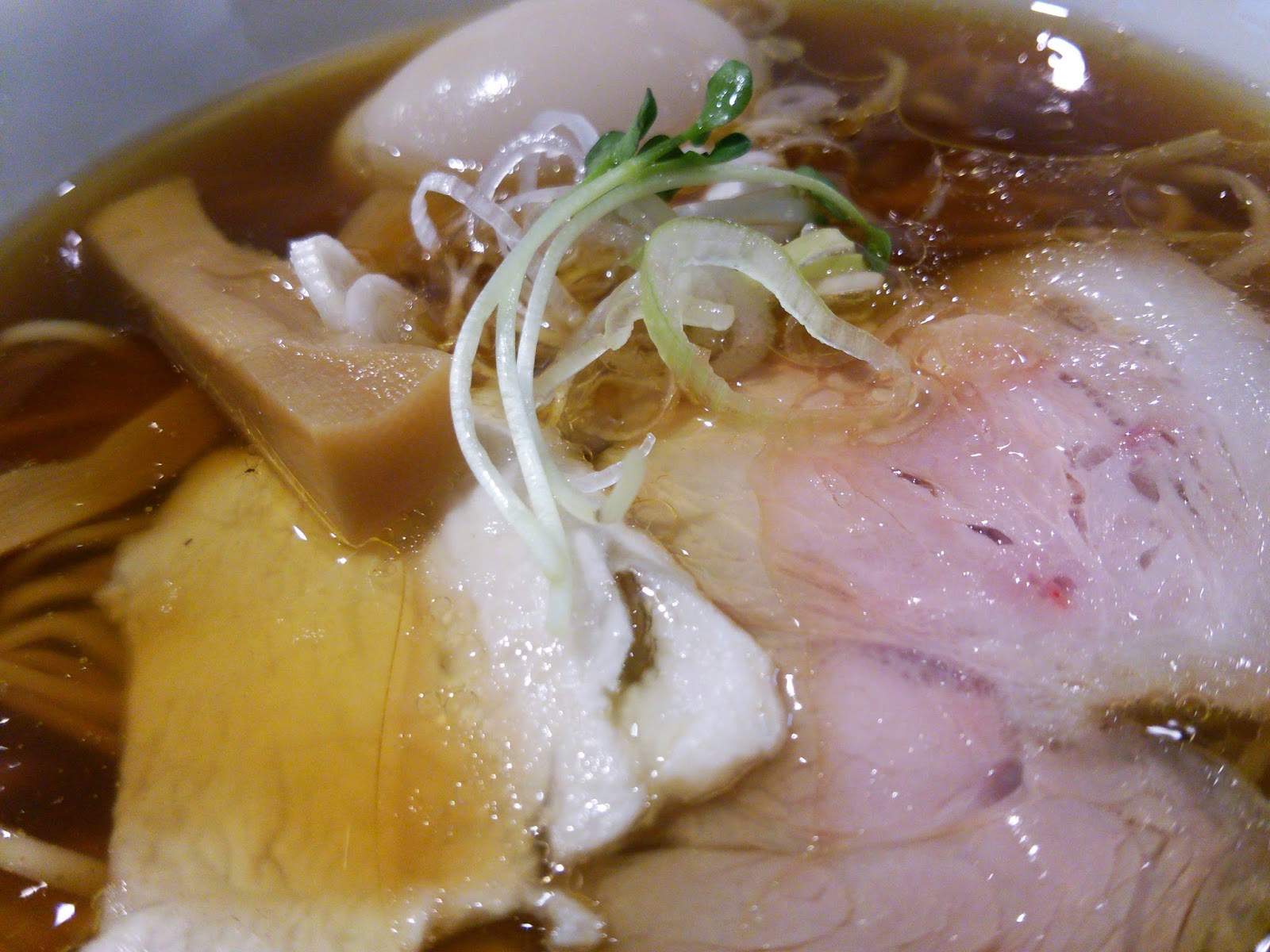 Lum
Posted by Ramen Love at 5:44 PM No comments:

It's officially summer in Japan. This means smelly trains during rush hour. Breaking out into a sweat immediately after exiting the shower. Running the air conditioning all night. Cicadas.

It also means that the hot ramen bowls your authors slavishly devour are slightly less devourable when the temperatures go well into the 90s. For wimps like us, some shops come out with cooling summer bowls. 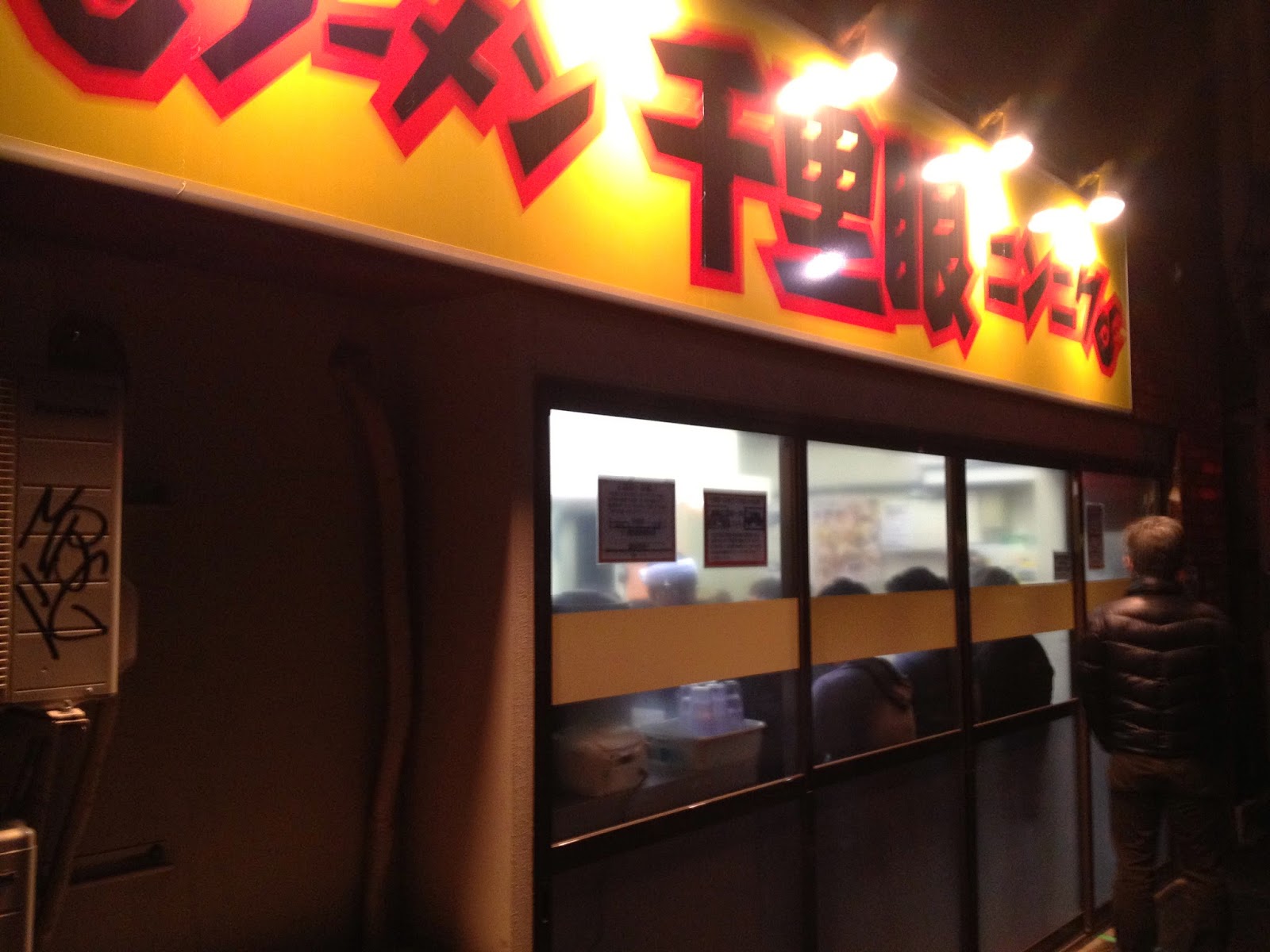 I live a stone's throw away from Senrigan, and I've been here several times to eat their jiro-kei monster bowl, which is probably the most popular in all of Tokyo. 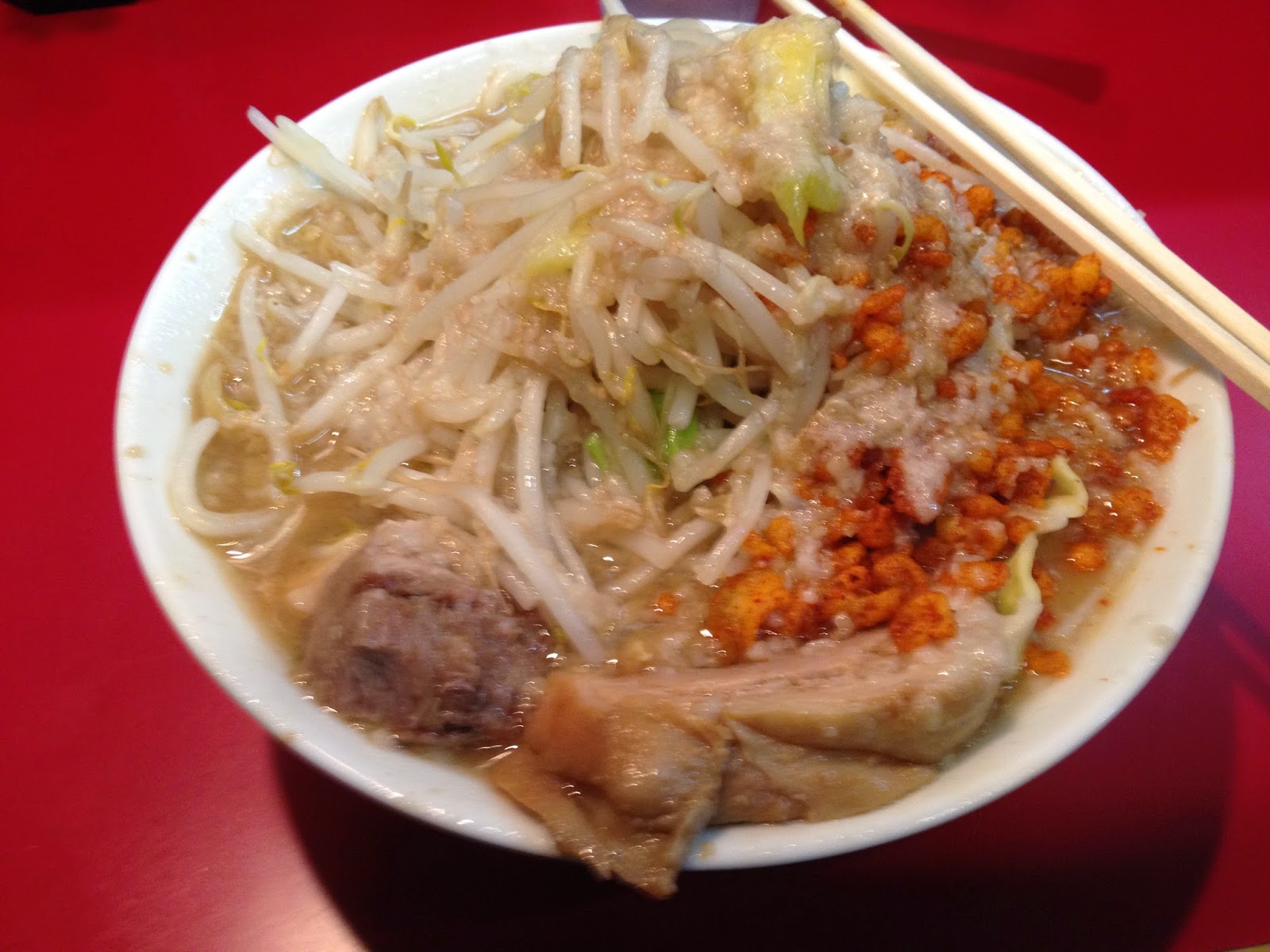 But I was here for another reason. The summer-only jiro-kei hiyashi-chuka.


Senrigan replaces the mound of bean sprouts and cabbage with a pile of thinly sliced daikon radish, cucumber, carrots, mizuna greens, and even a cherry tomato. The entire thing is topped with a layer of back fat, a dollop of garlic, drenched in goma sesame sauce, and then drizzled with garlic mayo, a house original. The noodles are slathered with back fat like an abura soba, and there are fried red bits that give the bowl an extra spicy and crunchy kick. There is no soup. 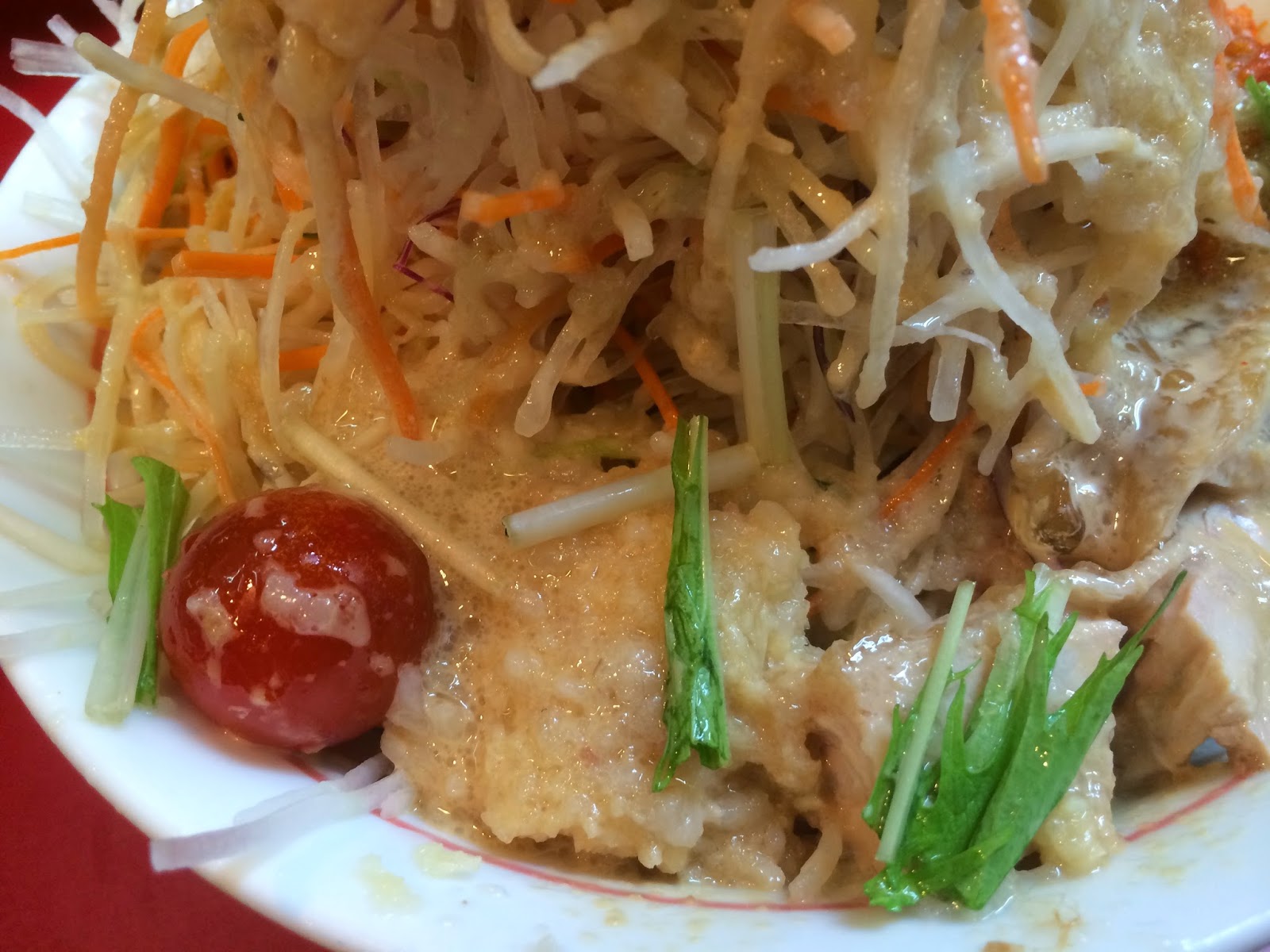 The first bite is nearly orgasmic, there's so much flavor. But soon one faces the daunting task of consuming the entire thing. Mouthfuls of noodle and julienned vegetable soaked in grease, sauce, and garlic. Halfway through, each bite became exponentionally more difficult to swallow. 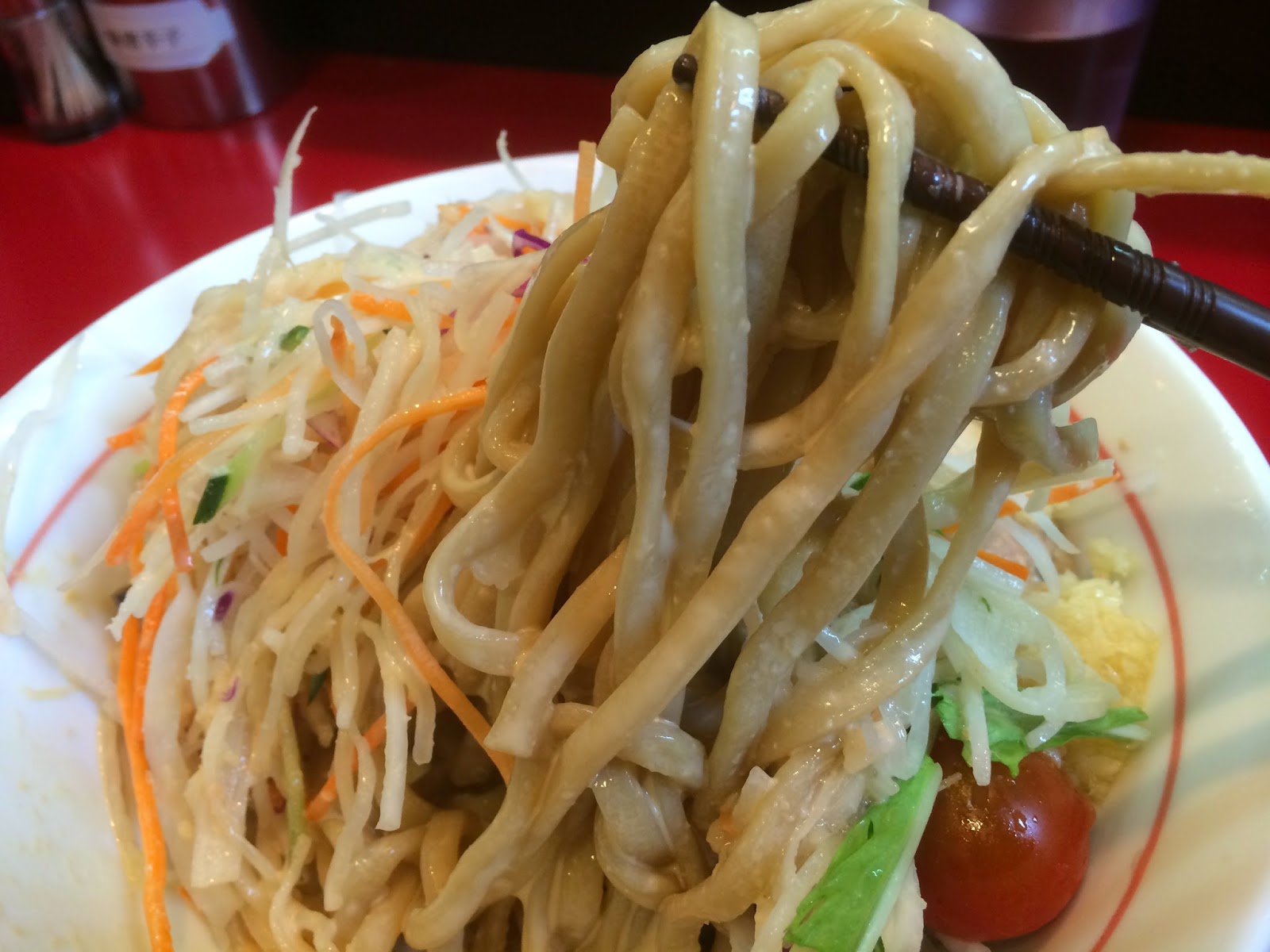 Hiyashi-chuka is supposed to be a refreshing bowl that your ramen-adverse mother would enjoy, but this was intense. Leave mother at home for this one. Those with big appetites and a high threshold for garlic are advised to try it before the summer is over, but get there early, as the line was 40 DEEP by the time we left the shop. 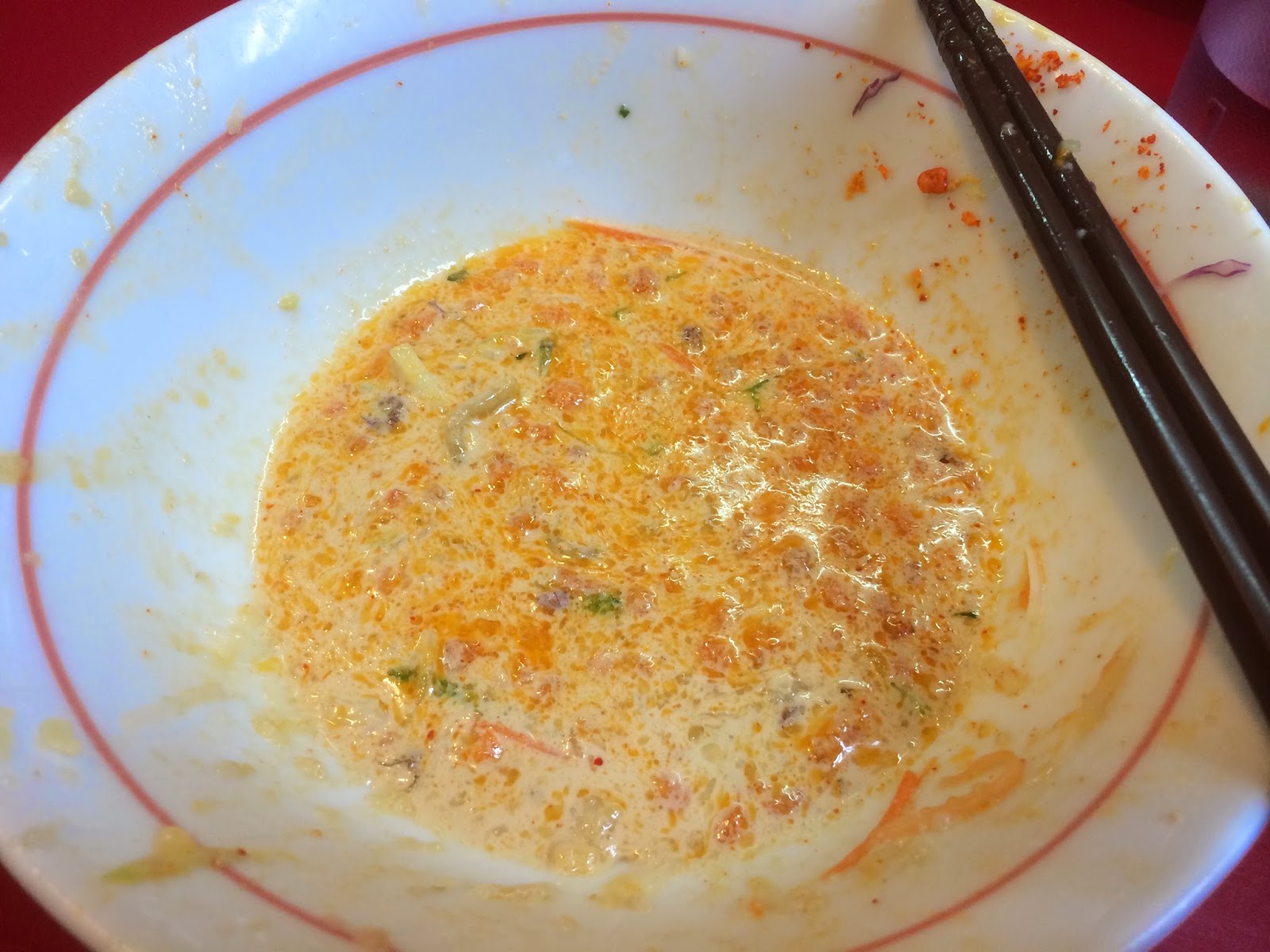 Hearts
Posted by Ramen Love at 1:14 PM No comments:

I got food poisoning and hadn't eaten for a week. But even when I have food poisoning, my appetite for ramen remains. In fact, I was craving ramen so much that it just built up inside my like a nuclear bomb ready to EXPLODE.

Hearts and I had both heard great things about Matador, way out in Kitasenju. I had seen shots of its beautiful beef chashu while browsing through ramen magazines, and even though I wasn't fully recovered, I decided this would be the next shop. 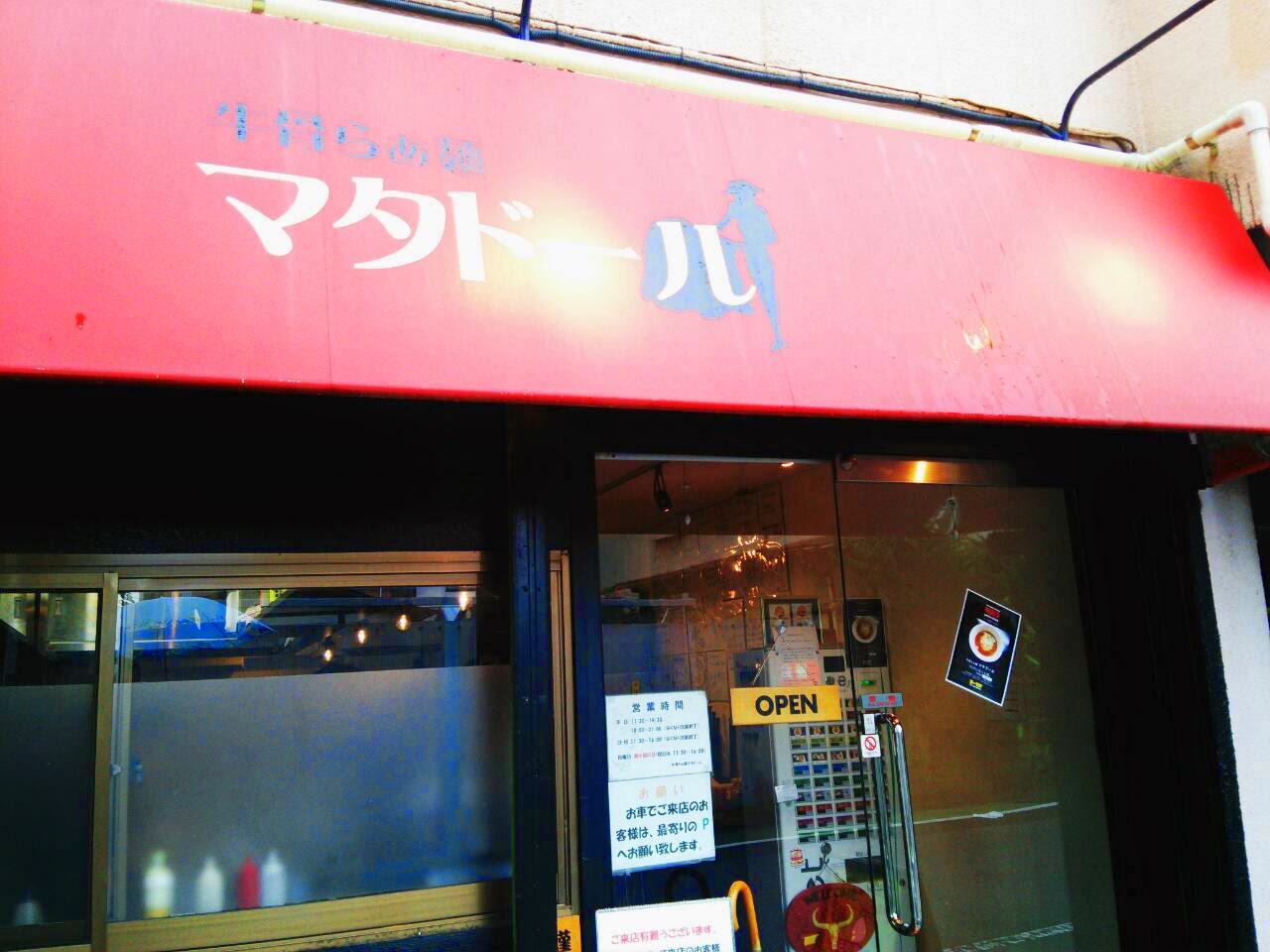 Indeed, the apperance is beautiful. Instead of pork bones for the broth, Matador uses primarily beef and a lot of vegetables. The shoyu soup is clear, but packs a beefy aroma. Instead of chashu, the standard bowl comes with bits of beef fat and gristle scattered floating on top.


These noodles are as smooth as silk... 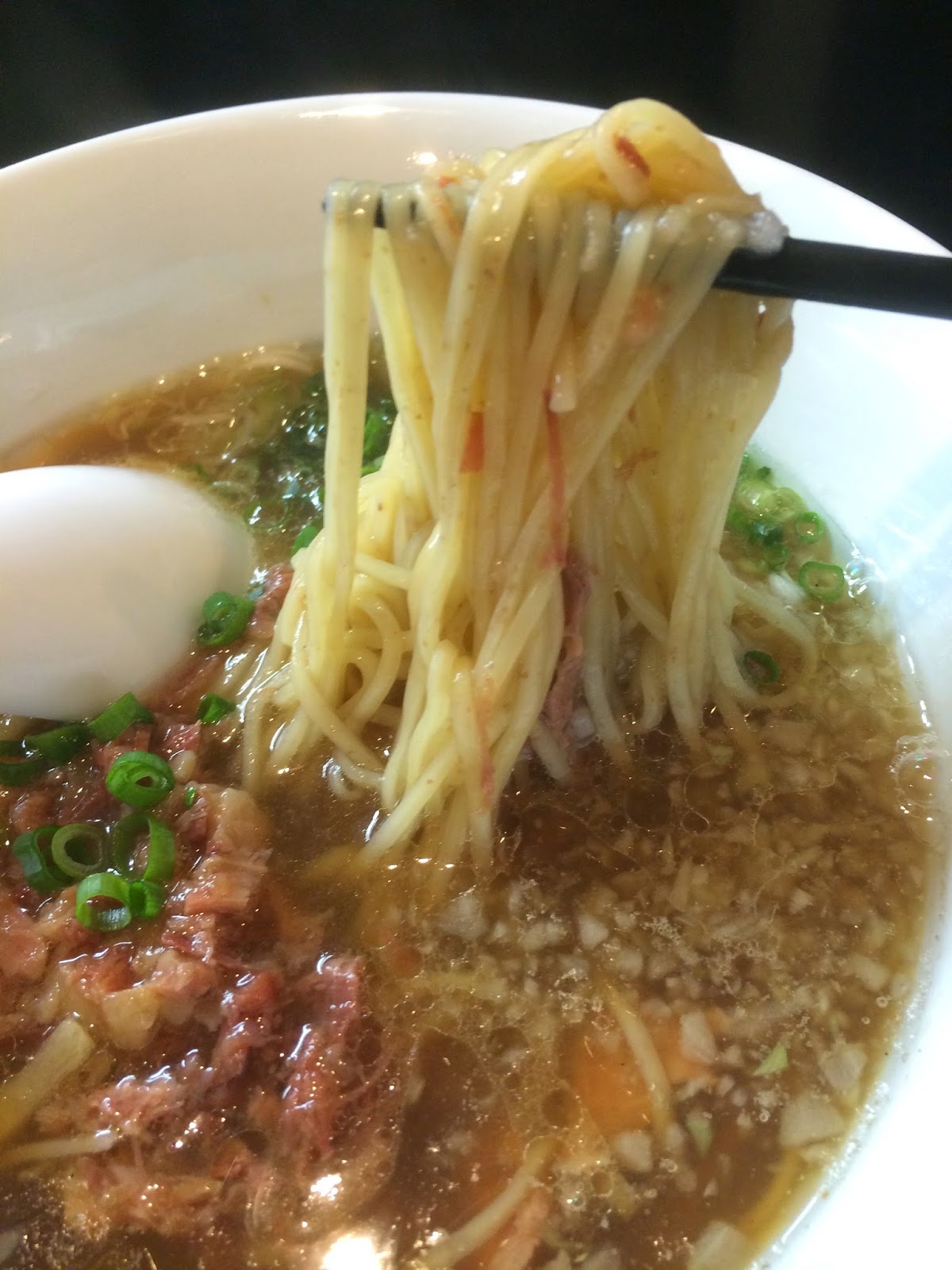 ...but the star is the deluxe bowl's roast beef chashu. "Zeitaku" means decadent, and this bowl has everything but a dainty hat and expensive gown. In lieu of pork chashu, Matador supplies its customers not one, but two thick slices of perfectly cured roast beef.


I've never eaten ramen like this before, but I felt a perfect synergy between Japanese and western flavors, with the sweetness of the beef and vegetables matching the deep saltiness of the shoyu soup and chewy noodles.

Matador is definitely a must-visit shop, even if it's a little bit of a trip from central Tokyo (it's still considered Tokyo). Clean ramen and clean shop, with a friendly owner who answered our annoying ramen-geek questions. I hope more people can experience this complex bowl. 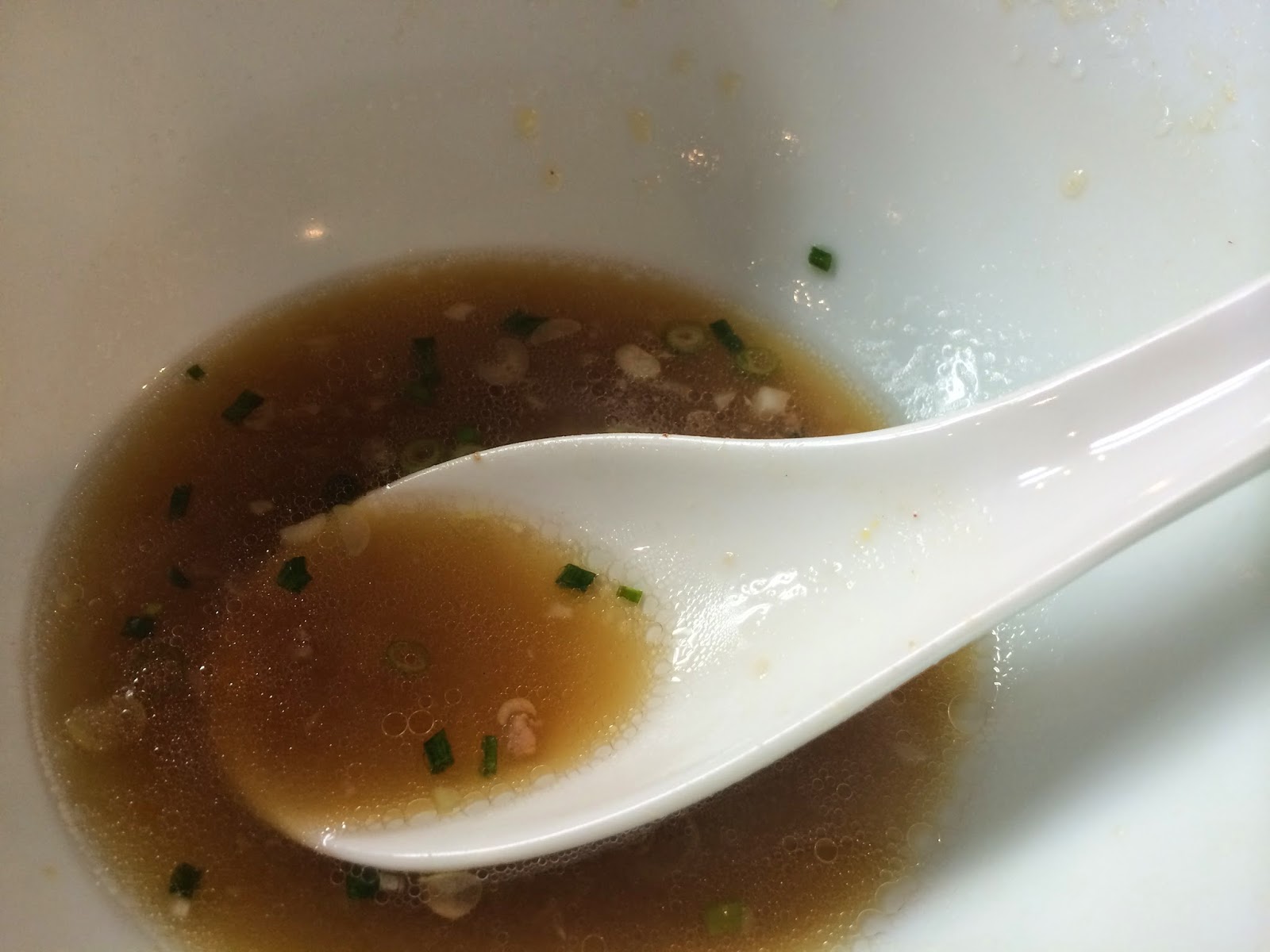