麺屋音 Oto: a noise within

Kitasenju is well-known for Matador and its Miso sister, but there are a lot of solid shops that most people don't bother with since the area is so far out of central Tokyo.


Oto, serving up another smooth as silk niboshi, usually has a small line of diverse clientele: salarymen, office laides, teenagers going home from cram school, hostesses about to begin an all-night shift represent this lively part of town. Oto, though, is refined, with a corridor that would befit an expensive kaiseki restaurant. 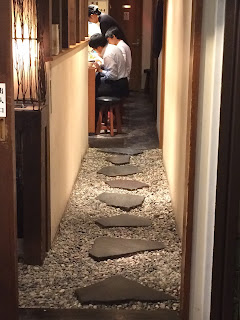 The glamour doesn't stop at the entrance. You are given an oshibori hot towel, and your ramen is served on a lacquer tray flecked with gold specks. 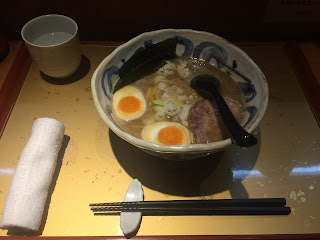 The ramen? Great stuff, with an assortment of toppings and seasonings to vary the flavor. The broth is surprisingly mild, given a freshness with bits of chopped scallion, onions, and yuzu peel, and the thin noodles are a nice match for this soup. 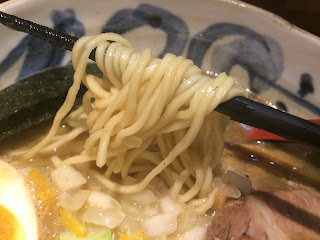 A standout is this chicken meatball comprised of bits of nankotsu, or chicken cartilage, which give the usual mushy texture of the meatballs a nice crunchiness. 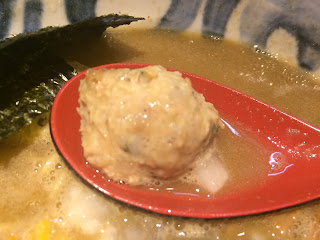 Oto means "sound" in Japanese, and the day I visited the shop was noisy with the chatter of a couple young hostesses talking non-stop about non-ramen things. I'd imagine, though, that this austere setting would typically be a quiet meal amidst the bustle of the Kitasenju crowd on most days. 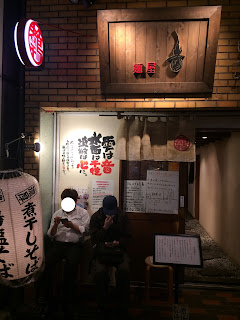 Hearts
Posted by Ramen Love at 10:35 AM No comments:

Our ramen journey in Hokkaido continued. After going to Saimi, we went to Susukino in Sapporo. This area seems just like Kabukicho in Shinjuku. Two bowls of ramen sounded crazy for my tiny woman’s body, but we came all the way here, so my doubts blew away very fast. Hearts got a few local beers in Susukino, and after it got dark, we headed to Shingen. Shingen is originally from Ishikari, midwest Hokkaido. Because of the fishermen in this cold area, Shingen is famous for Ishikari-nabe, which is a miso-based hot pot. The miso ramen must be popular after drinking, but they serve various kinds of ramen. Here are parts of the menu.

These interesting names are feudal domains in Edo era of Japan. Not coincidentally, Shingen is also the name of a legendary daimyo whose attempts to rule the country have been chronicled in films, dramas, and video games. Conquer all the bowls and become the Shogun of Susukino.

We heard the shio at this Shingen was their specialty, and since we also we just ate miso at Saimi, we both ordered shio. Tosa (light)...

I prefer Satsuma more than Tosa. Even the half-sized bowl was bigger than I expected; just seeing it made my stomach stuffed, but once I sipped the soup, I oddly kept eating. The rich bowl has what appears to be a soup closer to tonkotsu in its consistency, but the shio tare gives the bowl a creamy, buttery flavor that is strangely not salty at all. 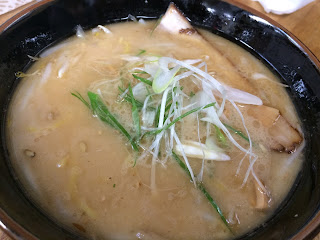 I had never eaten such a creamy shio before, and the curly egg noodles go fantastically well with the soup. The noodles seemed like they were dancing on my lips. 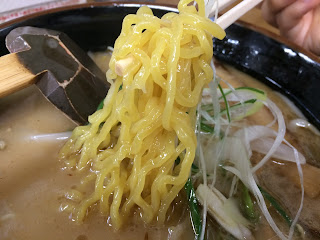 When I hear “shio,” I always imagined a transparent soup, but Shingen's creamy shio was shockingly good. I cannot describe Shingen in Susukino as beautiful, but I really like the sticky, oily floor and its old-time shokudo (cafeteria) atmosphere. What both Hearts and I liked more is that we can order half-sized ramen. It is a really reasonable choice for ramen hunters, small eaters, or as post-drinking ramen. Even after a couple months have passed from our trip, Shingen stays in my heart. 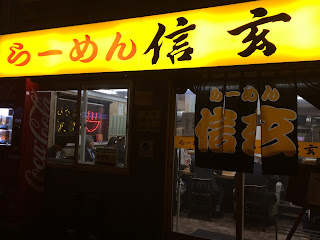 Lum
Posted by Ramen Love at 9:50 AM No comments:

Sapporo is known not just for great ramen, but great food in general, from fresh dairy to grilled lamb and value revolving sushi. The city's claim to fame is miso, so Lum and I trekked over to the top-ranked shop in the city. Saimi is the highest rated miso shop on Tabelog and numerous ramen ranking sites in all of Japan. Get there well before it opens on a weekday and the lines won't be too bad.


Saimi puts out a refined miso in the vein of Sumire or Sapporo Junren, but without the added layers of back fat that tends to weigh those bowls down. Saimi goes heavy on fresh ginger to cut some of the fermented saltiness of the miso, and adds in several little touches to vary the texture, from the chewy bits of pork to the thin and crunchy menma. They also use a very high quality miso blend, with a tonkotsu soup that is also cut with some gyokai broth. The result is a bowl that is smooth to the very end, without any cloying miso aftertaste, and one of the very few miso bowls I didn't get sick of midway through. 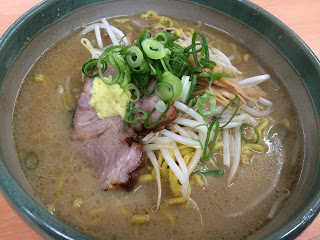 Another reason this bowl is so strong is the chewy yellow noodles, a staple of most miso bowls. These are springy and full of hearty bite. Some of the best noodles of any bowl I've ever had. 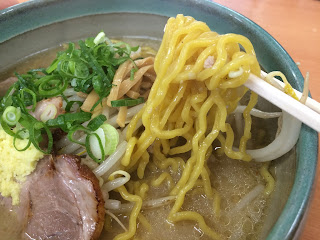 Whether or not Saimi is your number one is all a matter of taste and perspective, but at worst, this is a very accessible bowl that doesn't inspire haters, and at best, is one of the smoothest, most balanced bowls of miso in the country. 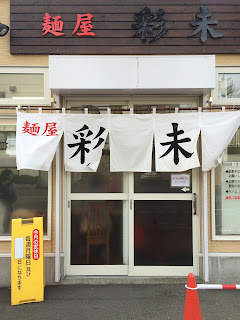 Hearts
Posted by Ramen Love at 5:03 PM No comments: