I can't believe I never tried Kaotan sooner, especially during my days working in Roppongi.

Make sure you go to the Minami-Aoyama shop, and not the one in Akasaka that doesn't have half the charm of this place. This little shack looks like it's ready to crumble. The inside is like a packrat's den transformed into makeshift izakaya, the long communal table lined with salarymen eating ramen and throwing back glasses of beer and oolong-hais. You go for the atmosphere as much as the food. 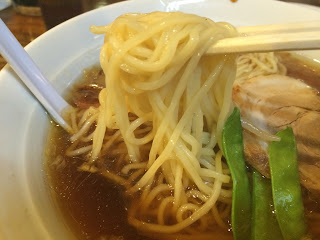 The food is also pretty good. A classic shoyu with chicken oil, topped with fried scallions to bring out the umami. Nothing fancy about this bowl, just a great example of chukasoba done right and priced affordably for everyday slurping. The staple "green" here is supplied by sugar peas, a regular ingredient in Chinese stir-fry and a nice signature for the shop considering it also serves up a lot of Chinese side dishes (including gyoza, of course). 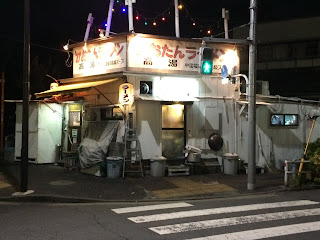 I wish I knew about this place three years ago. It would have saved me many a trip to seedy kebab joints early in the morning.

If you're starving around Shinjuku, ramen can save your life! Horiuchi is one of the best options.


Don't get confused by the shop just a couple storefronts down called Manrai. The owner of Horiuchi used to work at Manrai, but left to open his own shop after the original owner of Manrai retired and the building was subsequently torn down and rebuilt (and the original shop was reopened with a second owner). While we were waiting in line, a lot of salarymen were entering, slurping quickly, bumping elbows on the tightly packed counter, and leaving one after the other. The staff here is briskly efficient and knows how to quickly turn over a lunch counter. We got seated quickly. 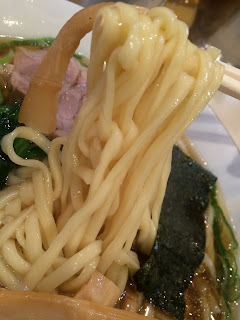 We were surprised at the giant chashu and the noodles which seemed to run off the edge of the bowl. The standard ramen betrays its heritage and looks pretty much the same as Manrai. It's difficult to say which place is better. For me, the chewiness and smoothness of the noodles at Horiuchi made the biggest impression, like eating inaniwa udon from Akita prefecture. This is a heavy bowl, but the noodles are so silky that you can't stop slurping.


Hearts got the chashu tsukemen, which is called zaru here. The portion of noodles is huge, covered in dried nori. The soup is a little different from the ramen, saltier, a little sour, and containing a lot of ground red pepper. I think I'd crave this bowl in the summer because I could feel like I'm eating zaru soba, but still have that heavier ramen flavor. 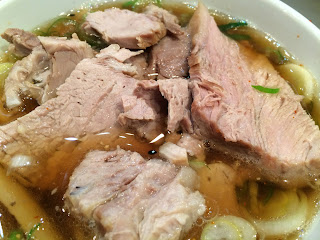 If you want to gobble high quality, old school shoyu ramen in a peaceful atmosphere surrounded by determined salarymen, Horiuchi is a little haven in bustling Shinjuku. 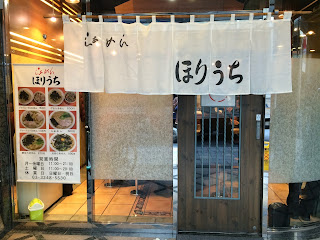